What’s The Difference Between an EP and LP? 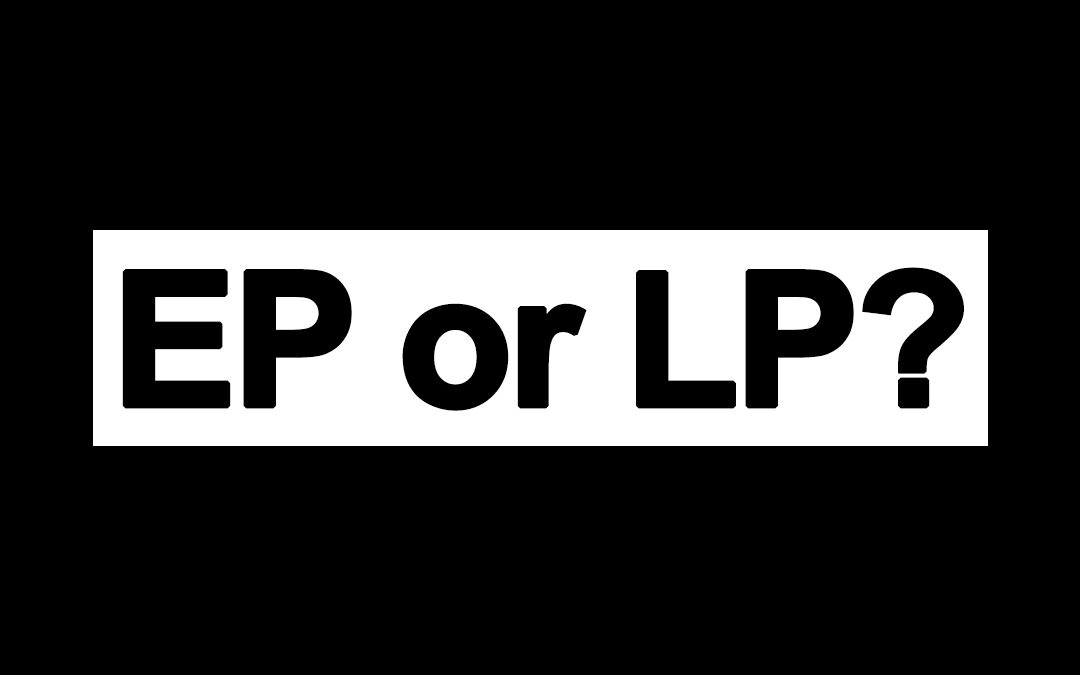 What is the Definition of EP and LP

Very simply, these days an LP is a full-length album. LPs historically are thoughtfully constructed, 12-15 song projects that last between 30-50 min – although as we’ve moved further from analog records we’ve seen more variation in terms of length and number of songs.

An EP, to put it plainly, is a short album – sometimes referred to as a “half album”. EPs must be between 4-6 songs and generally are under 30 minutes. The title of an EP generally includes the word “EP.”

You may be wondering, “What do the acronyms EP and LP stand for?” These are terms leftover from the days of vinyl records that are not important to know, and the definitions actually make it more confusing. LP stands for “Long Playing Record” and EP stands for “Extended Play Record” – which is confusing because an EP is a short album… not extended. These terms refer to different speeds and types of vinyl records, which is a fun fact but is essentially irrelevant at this point in music’s digital life cycle (no diss to anyone who wants to sell vinyl!).

Should I Make An EP or LP

There are pros and cons to creating an EP versus an LP. Back in the days of records, creating a full-length 10+ song album was expensive. To build a buzz for an upcoming album or tour, or to save on costs of recording time, manufacturing records, promotion, etc. – artists would create shorter projects that were called EPs.

Technically, the same is true today – although the total cost and the difference in cost between 6 versus 10 songs wouldn’t be as extreme as it was back in the analog days. Today, the reasons why artists, managers, and labels choose to create EPs are generally more strategic and/or artistic versus logistical or economical.

One thing we see a lot of today is artists and labels using EPs as an audience tester. When an artist is trying out a new style or a label or management company signs a new artist, they’ll oftentimes opt for a shorter 4-6 song project over a full-length album. The idea here is to quickly put a project to see how the market reacts. Gauging the response to the EP will help determine which direction the artist should move in. You may find that the fanbase is itching for a full project, or you may find that you need to keep building buzz and honing your sound and that may call for you to release more singles, try a new approach, or maybe even go back to the drawing board.

The other reason artists are opting for EPs is playlists. Audiences and listeners that are into “new music” often discover new artists and music via playlists. For these types of listeners, sitting through a 15 song album can feel like a chore, while a more bite-sized EP or single feels more manageable.

It’s also worth noting that DSPs like Spotify and Apple Music will automatically add the “EP” to your release if the project is between 4-6 songs and under 30 minutes.

Not Enough Music for an LP or EP? Try a Single

These days, the difference between an EP and LP isn’t quite as distinct as it once was. With attention spans shrinking – and the length of songs and albums shrinking along with it – the conventional wisdom is that shorter is better, and many “albums” come out looking like EPs.

Beyond that, we’ve seen the rise of singles. As the barriers to releasing music diminish, artists and labels are opting for more frequent releases with less material, oftentimes skipping ‘projects’ altogether to release a stream of singles until one of them hits. Indie superstar, Russ, famously suggests that artists “Take your album that you’re planning to put out, and chop it up and release it periodically as singles instead.”

More and more artists are opting for a “single-based strategy,” as you can see every Friday in your Release Radar dominated by solo-track releases. These short, frequent releases can help keep fans engaged and build up momentum. This approach also allows artists to remain flexible, testing the waters before committing to a full project, in addition to being a great feedback mechanism for what’s working and what isn’t.

Despite the name, Singles don’t necessarily have to only contain a single song – although they often do. Perhaps even more confusing than the EP acronym, it seems as though this may have its roots once again back in the days of records, where singles would be released with multiple versions of the same song. For example, a Single might contain some combination of the original track, a radio edit, the clean version, the instrumental version, and even a remix – which would result in a “single” that has five tracks.

These days, a Single technically refers to any body of work with 3 or fewer songs – as we’ve seen an increasing amount of what some artists refer to as “2 packs” or “3 packs”. The most notable, recent example of a 3 song project is Drake’s latest release, Scary Hours 2. Although it is confusingly being referred to as an EP (perhaps because it totals over 10 min in length), Spotify and Apple Music will automatically count anything under 3 tracks as a single.

There are pros and cons to each of the above release formats – and which one is best for you depends on where you’re at and what your goals are.

Lots of artists, especially new artists, feel like a fully polished full-length album or LP is the only option. EPs and Singles are an excellent interim step before blowing a budget on a full-scale, fully produced LP.

Utilize EPs and Singles to test concepts, try out new styles, prove a point, gauge audience engagements, and sell yourself to labels, brands, and potential collaborators.