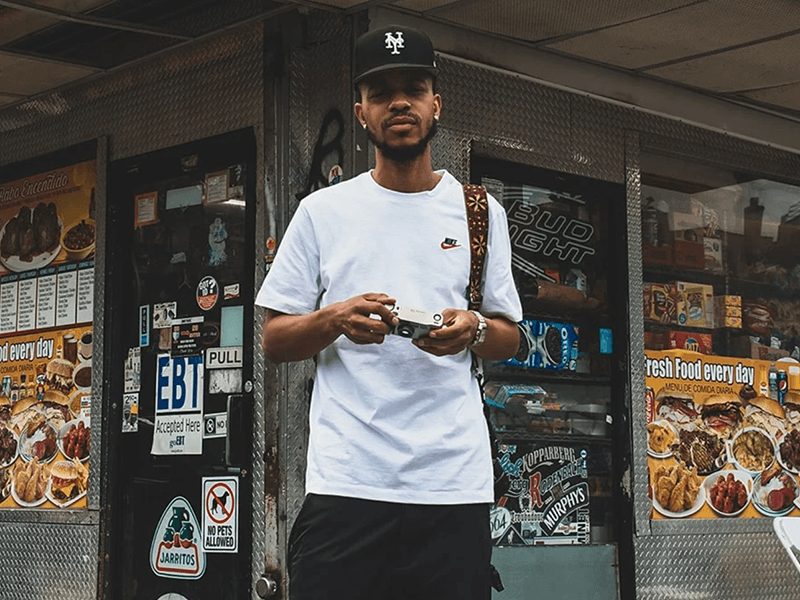 On this week’s unsigned podcast, Murph catches up with photographer and creative director, Steve Sweatpants.

Steven Irby, affectionately known as Steve Sweatpants, is a New York native, born in East Flatbush and raised mostly in Jamaica, Queens. In addition to being a skilled photographer and director, Steve is also one of the cofounders of Street Dreams – a magazine and creative agency home to a group of NYC-based photographers, videographers, graphic designers, and other visual creatives. Together, they’ve created their own platforms in Street Dreams Magazine, Street Dreams Radio, and StreetDreams.co for showcasing their own work and the work of other talented creatives in need of a spotlight. In addition, they execute visual campaigns for brands and companies of all sizes – including some of the biggest name brands you can think of, including Nike, Apple, Sony, and The NBA.

Growing up in Queens, photography really wasn’t on Steve’s radar. In middle and junior high school, he would play instruments in the orchestra at school, first violin and cello, and later saxophone. He went to highschool for computer repair, where he would end up spending more time on the Hypebeast message board than actually learning to fix computers. From this fascination of all things creative, Steve decided to team up with several of his friends that were “up-and-coming” artists and would help out where he could. (We call this the “Hang out and help out” strategy). The need arose for photos and videos to be taken, and it only made sense for Steve to pick up the camera. He quickly realized he enjoyed creating with his hands and became the go-to photographer in their group. When he and the artists would eventually split ways, the photography stuck.

From there, Steve started meeting and connecting with other creatives like himself, outside his immediate circle. Through hustle and networking, he began to build a little buzz on IG. His friend and barber, AJ – a mini-socialite in his own right who was instrumental in connecting Steve with the creative scene in the city – would end up introducing Steve to his future collaborator and partner Eric Veloso and Mike C – who at the time ran a Tumblr page that would serve as the early blueprint for what would later become Street Dreams and Street Dreams Magazine.

Street Dreams was created after making a few realizations. 1) There was so much talent not being recognized because it was so difficult to published or placed. And 2) Steve and Mike and Eric had way better relationships with the photographers, graphic designers, and other creatives in the community than any publications or brand did.

And so, they created Street Dreams. A creative entity with several arms, all with the goal of providing opportunity and recognition to the talented community of which they were apart.

The visual agency would serve as a hub for soliciting projects and collaborating with brands and clients. Street Dreams Magazine would provide a platform to showcase their own work and highlight the work of those in their community in need of a spotlight. With each issue, they approach it like a creative time capsule, capturing a particular creative energy at a specific moment in time.

StreetDreams.co came down the line and it serves as an online home for the collective, as well as Street Dreams Radio. Additionally, over the last 3 years (pre-Corona), they have created a huge event series that would combine the best elements of a mixer, gallery, pop-up shop, and party. They were so successful that in recent years, they’ve actually broken them up into massive 3 day weekend events.

From the beginning, Street Dreams always existed at the intersection of art and media, with a big focus on music. Since his days in the orchestra, Steve has always made music a part of his life. On a personal level, he uses music as one of his strongest tools for drawing inspiration and exploring a mood or feeling in preparation for a project.

On a different level, music has always played an important part in the direction of Street Dreams, with the visual arts and music scenes in NYC being so closely related. Steve loves working with companies like Vevo and Governor’s Ball, which allow him to take part in creating meaningful artistic moments.

As we’ll talk about more in discussing how Steve approaches projects, music is front and center in his creative process. His message for artists – no matter what kind of music you’re making, in today’s day and age you’re going to need to pair it with visuals at some point. When you’re planning your visual, take time to carefully consider what emotion you’re looking to evoke with your song, and how you can create the same feeling visually.

As always, we asked Steve about his approach to starting a new project – and he told us all about how he harnesses the #MambaMentality.

He starts with one of the most practical tips we’ve heard before any art or brainstorming takes place… get as much lead time as possible. When a possible project comes up, be sure to accept as soon as you decide you want to do it and give yourself as much time as possible ahead of the deadline. Give yourself time to be creative.

Next, the overall goal for any project he approaches is always the same. Figure out the easiest and most hard-hitting way to portray their collaborative message. In other words, the goal is always to come up with ideas that are as practical and impactful as possible.

When determining the direction for a project (during the ample lead time he’s bought himself), Steve will embark on a deep dive into his mental catalog – drawing on his wealth of experiences and references from 10+ years in the game, working with a huge range of creatives, and collaborating with all kinds of brands and companies.

Rather than a formal mood board or creative deck (the preferred approach of our friend Visuals By Pierre), Steve takes a more organic, immersive approach that is focused on messaging. To explore the direction he’d like to go, Steve will spend a lot of time listening to music or even watching a show that evokes a certain feeling or explores a relevant topic. Rather than searching for specific pieces of inspiration, Steve strives to spend as much time in a mindset that brings out all the optimal emotions and moods for a particular direction – whether that’s hopeful, somber, aggressive, inspirational, or anywhere in between.

Since he’s successfully built up his own personal brand – along with Street Dreams and its various incarnations – we thought we’d ask Steve for a few tips for artists and other hopeful Instagrammers looking to build up their brand on social.

How Steve sees it, Instagram today is a competition for how “niche” you can be. (And remember, there are riches in niches). In other words, how much can you “own” a particular lane or embody a certain look/vibe/message/etc. Your following is a direct reflection of how well you are able to nail down who you are as an individual, and how effectively you are able to communicate that to the world. Your job is to translate the essence of your personal brand into the language of the playing field, namely images, stories, captions, and profile bios if we’re talking Instagram.

Once you’ve carefully chosen your lane… go hard. The next game is consistency. Consistent messaging combined with a consistent aesthetic is a powerful thing. The more you immerse yourself in your niche, the more you show people that you really live that life (whatever it is) the more they will believe you.

The goal is to really become a “source” for something. This doesn’t have to be like a news source, but a reliable source for… something. Whether that’s laughs, or dope scenery, or social justice, or sick beats, or cool new artists you’ve never heard of, or… literally anything.

In Steve’s case, he has become known for lengthy captions that have absolutely no relation to the photo they are paired with. Rather than the standard “Great day in _______ with great people,” Steve uses his IG captions like a twitter account or status update – completely divorced from the actual image, which is always a stunning composition. One recent example, a picture of a breaching whale (with no basketball in sight) accompanied by the caption, “Luka Doncic is definitely invited to the cookout.”

Now, not everyone can get away with such a bold signature, but his followers have come to expect and even get excited to see what random thought or bit of internal dialogue he shares next.

Long story short, the more time you spend living in your niche, the more you will actually become a participant of that space – and eventually, work up to being a mover and shaker like Steve Sweatpants.

Also in the works, a 3 Part Visual Series inspired by the corona-times titled, “How You Holding Up?” (Part 1: Pandemic. Part 2: Protest. Part 3: Aftermath)

Lastly, Issue 16 of Street Dreams – 2020’s first and only edition so make sure you check that out.